Clarence Thing Chock Ching was born on June 2, 1912 in Anahola, a scenic plantation village on the North Shore of Kauai. He was the fifth of eleven children born to Chinese immigrants Ching Koon Hook and Kam Sing.

Seeking a better life for their children, Ching Hook and Kam Sing relocated the family to Honolulu. Clarence enrolled at Saint Louis School, a private Catholic Marianist school founded in 1846. He excelled both in and out of the classroom. He was twice elected Class President and became a member of the school’s Chinese Literacy Improvement Association, an honor bestowed to students earning a scholastic average of 85 percent or higher. And although he was frail and sickly as a child, Clarence developed his body and endurance to become a champion boxer in high school.

Upon graduating from Saint Louis in 1932, Clarence attended night school and studied real estate and insurance. He married Dorothy Sau Pung Tom, with whom he had three children: Lawrence, Wallace and Jocelyn. By the late 1930s, he was managing the family store at Damon Tract, a residential and agricultural area next to what is now known as the Honolulu International Airport. He also began dabbling in real estate.

In 1956, Clarence and his business partner purchased 233 acres of Damon Tract. Less than a year later, the land was rezoned for airport and industrial use. Together, they developed Damon Tract into the Airport Industrial Park.

More success followed. Testing the waters of Hawaii’s low-cost housing market, Clarence built an ambitious housing development in Moanalua, which led to the developments in the Fort Shafter, Tripler, Red Hill, Moanalua Valley and Salt Lake areas. In 1958, he began development of an area in Salt Lake that would eventually open as the Honolulu Country Club. Two years later, he was part of a group that founded Hawaii National Bank. In the 1960s, in tribute to his Chinese heritage, Clarence played an instrumental role in the redevelopment of Chinatown Honolulu in the form of the Chinese Cultural Plaza. The pride and joy of his professional career, however, was developing Kukui Gardens, an 822-unit apartment complex for low-income residents.
Said his nephew, Raymond Tam: “The best part about Kukui Gardens? He donated all the money from the project to charity, through his Foundation. That is just the kind of person he was. He did not make a dime from Kukui Gardens. How many other successful businessmen would undertake such a project? His generosity and caring for the community made him special.”
Clarence T.C. Ching died on May 29, 1985 at the age of 72.

Just days after his passing, the Honolulu Advertiser wrote: “As the son of an immigrant father, Clarence Ching worked hard all his life. He proved that a humble beginning is no barrier if one has constructive dreams and the ability and determination to make them come true. His good deeds will live after him. But he will be sorely missed by all who knew him and of his deep care for the community.”

Read a few excerpts from A Prophecy Fulfilled: The Story of Clarence T.C. Ching. 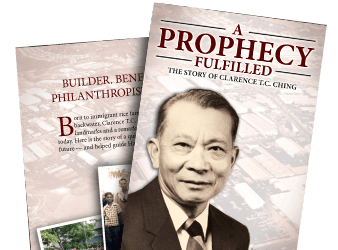 Excerpts From Our Book

Read a few excerpts from A Prophecy Fulfilled: The Story of Clarence T.C. Ching.